The value of Bitcoin

This is my final essay for my humanities module Digital Sociology, where we discuss how technologies shape interactions between people.

In October of 2008, a username in a cryptography mailing list published a white paper explaining the mechanics of a new decentralised, peer-to-peer digital currency called Bitcoin (Nakamoto 2008). Operating under the same username, Satoshi Nakamoto - probably a pseudonym for one or more persons - released the open source software to allow the production and trade of bitcoins in January 2009. 1 BTC fetched a price of 0.005 USD. By the end of November 2017, 1 BTC was worth 11,000 USD - 2.2 million times its initial value.

So what is bitcoin? Bitcoin is an open source, decentralised, pseudonymous currency that is governed by deterministic algorithms rather than institutions. Anytime bitcoin between users are exchanged, the Bitcoin network is responsible to ensure that the transactions are valid. Anyone can setup their computer to become a ‘node’ and get paid for contributing their computing power to maintaining the network. These nodes are rewarded with bitcoin whenever they verify a transaction. More than half of the nodes in the networks need to verify the transaction before it is considered as valid. All transactions are stored in a blockchain - an immutable list of every transaction in history. There is a cap to the number of bitcoins that can exist - after this cap is reached, no further bitcoins will be created. This makes bitcoin a deflationary currency - one that appreciates in buying power over time. Users in the network are identified only by their public key - a pseudonym for themselves - and can maintain some levels of anonymity.

In May 2010, the first real world transaction with bitcoin was made by Laszlo Hanyecz and Jeremy Sturdivanz. Laszlo bought 2 pizzas from Jeremy for 10,000 BTC. While all subsequent media coverage focuses on the value of these bitcoins in todays market, what is significantly more interesting is the interaction between Laszlo and Jeremy. Laszlo initiated the trade on a bitcoin forum, explaining that ‘it would be interesting if I could say that I paid for a pizza in bitcoins’. Jeremy took up this offer 4 days later, ordering 2 pizzas to Laszlo’s residence in exchange for the bitcoins. While it seems like a worthwhile investment from Jeremy in hindsight, it look a big leap of faith at that time to trade something of real world value (USD to buy the pizzas) in exchange for bitcoin. A rational economist would say that the deal was irrational.

The majority of the early transactions of bitcoin can be explained by the embeddedness of the bitcoin market. The early bitcoin users support the vision that bitcoin promises, a decentralised, anonymous digital currency. They are willing to go through inconveniences in the infancy of the network if means that they can result in better awareness about the technology. These people are labeled as innovators by Everett Rogers. These are people who believe in the innovation and are socially close to the innovators and they are willing to take risks, which allows them to adopt innovation which might ultimately fail (Rodgers, 1962). Their social relations are a main driving force to adopt the innovation rather than purely rational reasons. Similarly Laszlo and Jeremy’s economic experiment was a case of two individuals wanting to prove to the rest of the community that bitcoin can be used as a form of currency to exchange goods. Many of the early transactions were an example of the embeddedness of the bitcoin market. Users started accepting online payments using bitcoins despite the low supply, knowing that it would encourage more people to use bitcoin in the future.

Fast forward to the present, bitcoin rose from 1000 USD to 11000 USD in 2017 alone. It has no longer become rare for bitcoin to be mentioned by major news publication sites on a weekly basis. People who do not understand how bitcoin works are trying to jump in on the wave in the fear of missing out.

In economic sociology, the tipping model is a case of critical-mass phenomena (Schelling, 1978) - actor’s actions are influenced when there are enough other actors who perform that particular actions. Actors have two alternatives and the costs and/or benefits of each is dependent on how many other actors choose which alternative. This results in the concept of a threshold, which is the proportion of others who must make a particular decision before a given actor is inclined to do so (Granovetter 1978). Each actor has his own individual threshold, but a mass adoption of a innovation happens when the threshold is passed for enough actors, often resulting in a cascading effect.

The 2017 surge in bitcoin value is a result of the proportion of users talking about bitcoin increasing to the point where it tips the threshold for many users who have been observing bitcoin from the periphery but haven’t bought it. This causes the demand for bitcoin to increase, increasing its price. This causes media publications to take notice of it, as it has crossed their threshold for proportion of users using bitcoin in order for them to create an article on it. This creates a cycle where the tipping of the threshold creates a cascading effect as predicted. 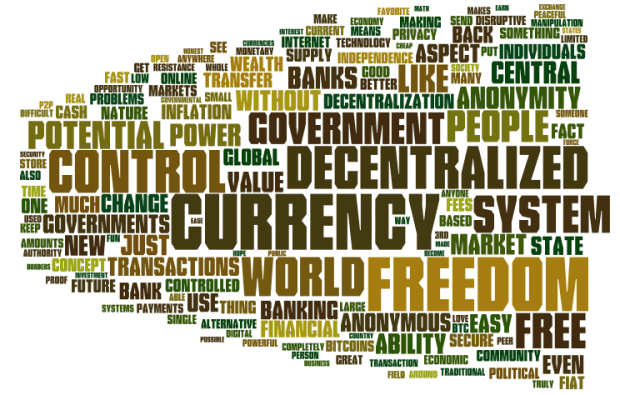 Bitcoin is hailed as the future of currency, yet many users have never actually used bitcoin outside of exchanges. In order to understand bitcoins viability as a currency and to gain a better understanding of bitcoin, the author set up two bitcoin wallets and transferred around 5 SGD worth of bitcoin between them 3 times. Utilising a public blockchain explorer, the following attributes of the transaction were measured: the amount of time needed for the transaction to be confirmed by the network and the fee that has to be paid to the network. The results are as follows.

A better description for bitcoin is a store of value. The value of bitcoin does not come from its utility, but rather the expectation to maintain or increase it’s purchasing power in the future. This makes bitcoin very similar to gold. Warren Buffet, the king of value investing, argues that land and companies are much more valuable to invest in the long term as they provide utility to the owners. The land will produce crops, while the company will issue dividends to its share holders. Gold, on the other hand, will remain as the same piece of gold. “You can fondle the cube, but it will not respond” (Buffet 2011). The same could be said of bitcoin and indeed gold and bitcoin are similar except through the medium that they are exchanged in. The Actor-Network Theory describes how relationships between actors are influenced by inanimate objects and the medium through which they interact (Latour 2005). Bitcoin is a new technology that makes use of some of the state of the art algorithms. It can also be transferred digitally through the internet which makes it a much more efficient way of transferring money as compared to gold. This gives bitcoin greater utility as a store of value, which explains the continued interest in bitcoin.

One has to remember that bitcoin was the first cryptocurrency to be popularised, which results in it being synonymous with cryptocurrency. There are other cryptocurrencies which are truly anonymous, have low transaction fees or can be used as a framework to built smart applications. Bitcoin has been legitimised by banks and governments and has become the de-facto means of exchange of these other cryptocurrencies. However, it is not the perfect currency. The community might decide to improve its algorithms to better suits the needs of a currency or they might keep bitcoin as a store of value and use another cryptocurrency. However, while the underlying technology of the cryptocurrency may change, the success of the currency is dependent on sociological relations between the users. There still needs to be early adopters within the social circle of the innovators and the adoption has to reach a level where the threshold for the majority of users has been tipped. Social constructivism is required for a new cryptocurrency. People need to work together to create the currency that they want to use in the future.

Disclaimer: The author possesses bitcoin and other cryptocurrency coins.

Latour, B., 2005. Reassembling the Social: An Introduction to Actor-Network-Theory. Oxford: Oxford UP.